Stratocaster vs. Telecaster: Why do they sound so different?

One of the many topics that rages round on the Internet and comes into the Ironstone mail box, surrounds the idea of Stratocaster and Telecaster comparison, specifically the differences / similarities between Stratocaster and Telecaster pickups. On one hand they are all basically single coil pickups in nature (compared to humbucker twin coils for example), yet there are significant differences between their constructions and thus tone. If you want to answer the question 'why do Strat's and Tele's sound different?', you are also going to have to delve into woods, body shape etc. But keeping it simple(r!) this article considers the pickups alone and their contribution to the Stratocaster Telecaster comparison.
See also the Ironstone page, Guitar Pickups Explained.

Stratocaster Single Coil Basics:
The pickups used in the vast majority of Strat's are classic single coil construction, meaning a single long length of fine wire wrapped several thousand times around a central bobbin that itself houses 6 pole pieces.
A number of factors have a fundamental impact on single coil pickup tone - both for Strat's and Teles;
A) The total number of coils of wire, commonly 'represented' by the pickups DC resistance. Broadly, the lower the number of windings, the lower the pickup output for a given string vibration and the 'brighter' the tone (and vice versa for increasing windings).

B) The thickness of the coil wire itself impacts the tone. Thicker wire (e.g 42AWG) will sound a little brighter than thinner (e.g. 43AWG) for the same output level.

C) Magnet type has possibly the most audible impact on tone, with Alnicos being the key to many of the qualities collectively described as 'Vintage Tone', warm and full in nature, without being over bright.

D) Surprisingly, the bobbin profile also has an impact, because it defines the shape that the windings will take on. A taller, thinner bobbin (i.e. a taller thinner winding too) will give a lower output style pickup with a better treble response. Lower fatter coils will give more output and a 'fatter' midrange.
All of the above (along with pole piece stagger, wax potting, scatter vs. machine winding etc etc) can change a single coil pickup's character to quite a degree.

But all Strat pickups based on this formula have an unmistakable  family tone - emotionally expressive and sounding somewhat 'alive', partly due to a degree of inherent susceptibility to background electrical noise. Think vinyl vs. CD / MP3 and you get the picture. In that sense, this basic single coil structure defines the starting point for the variations to be found in Telecaster pickups described opposite.
It should be noted that of course historically, the Telecaster came several years before the Stratocaster. But for this constructional comparison, its easier to build up from the basic Stratocaster style single coils as the starting point.

The Telecaster Neck pickup:
Starting with the basic single coil design already described, the obvious change for the Tele Neck is the metallic cover that sits over the bobbin and coils. Connected to the signal earth side, this cover was originally designed to act as a shield to reduce the electrical noise single coils can notoriously attract. Tele Neck pickups are normally noticeably quieter than 'open' Strat pickups.
The effects of the cover on the Tele Neck pickup's magnetic fields will become apparent later.But under the cover, there are two other subtle differences (in the original Tele specifications) compared to Strat pickups. Firstly, the Tele neck is based on a physically smaller bobbin, so a thinner taller coil profile for any given resistance.
Secondly, the original specification calls for thinner 43 AWG coil winding. As we have seen these features together give a mixture of tonal impacts, along with a slight tonal 'dulling' due to the effects of the Chrome cover.

The Telecaster Bridge pickup:
Without a doubt, the most complex piece of the Strat vs. Tele tone puzzle is the Tele Bridge Pickup. Beginning with the pickup itself, it features a thicker bobbin profile and (original specification) thicker 42 AWG wire. So as with the Neck, these two factors play against each other, rather than emphasising one tonal quality.

The obvious physical difference is the metal base plate, again electrically connected to the pickups signal earth in the same way as the Tele Neck pickup. Originally part of the same electrical noise shielding regime as the Neck pickup cover, the base plate also has a very strong focussing impact on the pickups magnetic field (see below).

But there is much more to the Tele Bridge story. At a basic level, the coil + magnet combination is reacting to any metal moving in its vicinity (e.g. strings). But the Tele Bridge also has a metal base plate that on some designs is not firmly bonded to the bobbin, and is supported under / within a nice big metal saddle plate by a non-rigid spring + screw arrangement. The net result of the pickup 'floating' within all this metal is that it becomes very sensitised to physical vibrations transmitted through the Tele body. At its best, this is a carefully controlled mechanical feedback that is a key part of the Tele 'twang' tonal signature. At its worst, a poor design will be subject to squealing microphonics.
An interesting and well documented alternative tonal character is achieved if the Bridge pickup is solidly mounted down onto the Tele body itself (as Andy Summer's signature Tele).

Most of the above considers the tonal impact of electrical and physical pickup characteristics. But to complete the picture, a Stratocaster Telecaster comparison of the magnetic field distribution is also well worth a look. Comparison (1) below is a simple iron-filings plot comparison above a standard Strat and Tele pickup layout.
The Strat pickup fields are as you might imagine - symmetrical ellipses with the pickups sufficiently far from each other that the fields interact but are not overly 'compressed'.

This is naturally even more pronounced in the two pickup, Tele plot. But its also clear that the two Tele pickups are different in their magnetic plots, both between each other and compared to the basic Strat. As described above, the Tele Neck has a thinner bobbin profile and that is quite evident in its field plot. The plot of the Tele bridge pickup itself looks similar to a Strat single coil. But this is significantly modified where the 'lips' of the earthed chrome saddle plate curtail the pickups magnetic influence on 3 of the 4 sides. 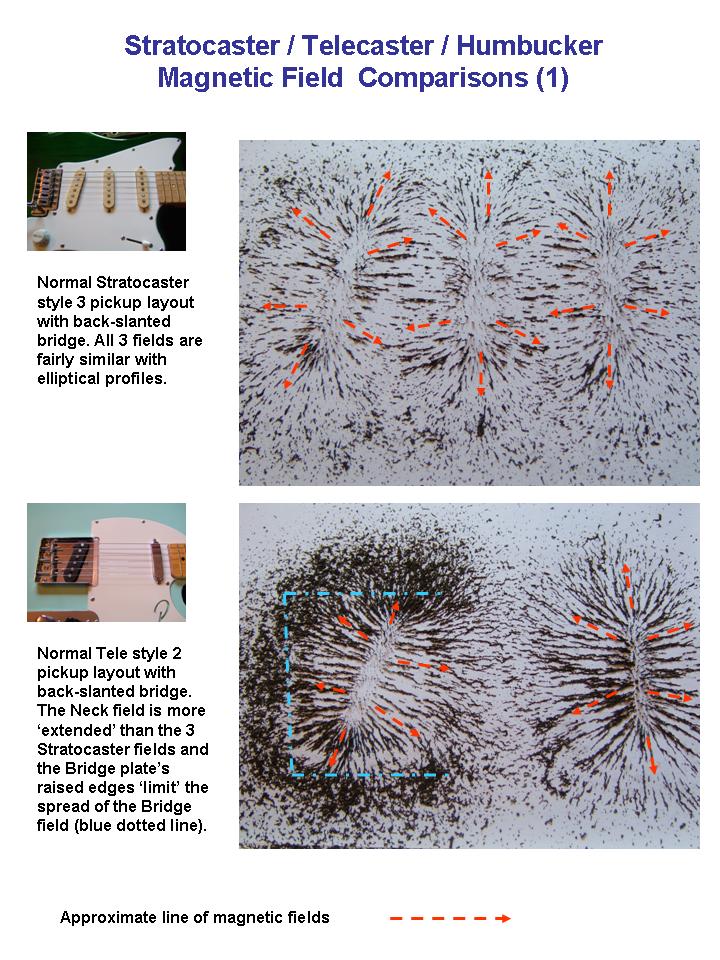 For comparison, a look at similar plots from underneath the pickups is also revealing. Comparison (2) shows a conventional Strat single coil plot (which basically mirrors the plot at the top of the pickup), and one based on the underside of a Tele Bridge with its grounded base plate.  The near circular plot of the Tele Bridge is very evident.

For completeness, the final plots compare a single coil to a humbucker, basically two single coils mounted side by side with each pickup having the opposite magnetic polarity to the other. This generates the compressed flow lines from one pickup to another. The same effect is also seen in the previous plots where the Ironstone Teles are magnetically reverse polarised to each other, as is the middle of the three Strat pickups. 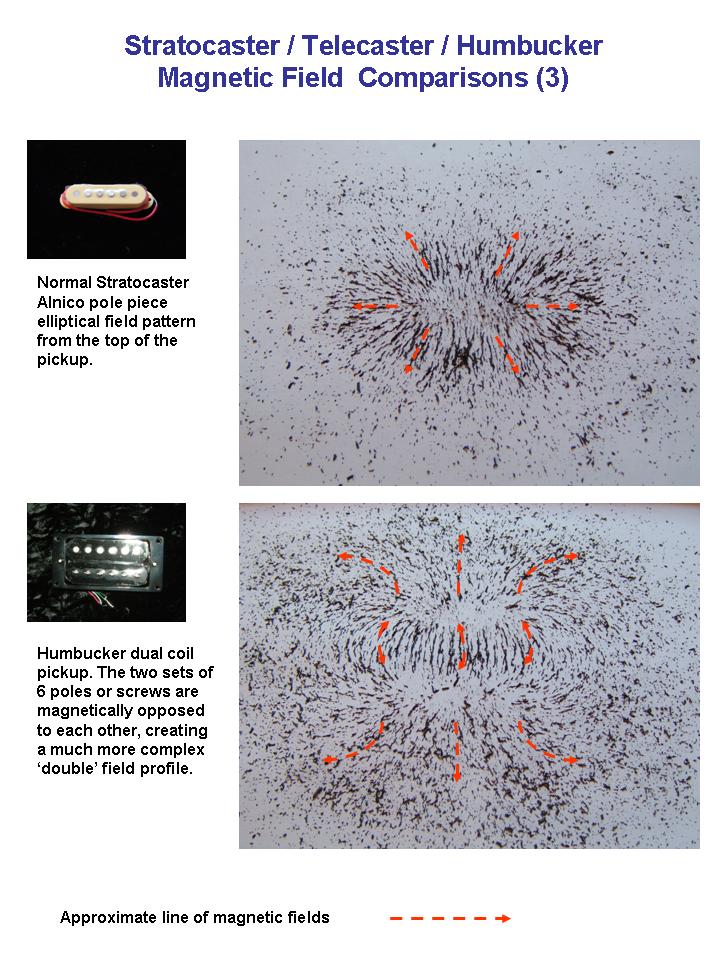 Stratocaster Telecaster comparison summary:
So with all of the above in mind, a little summary is required. The significant differences in construction and operation discussed, make it clear why Strat single coil pickups sound different to a Tele Neck pickup, and different again to a Tele Bridge pickup.
These differences are fundamental to each of the pickups described. Based on that alone, it should be clear that a set of Tele pickups is never really going to sound like a set of Strat pickups (and vice versa) regardless of what body, neck etc they are mounted in.

The classic 'Tele Twang' and 'Strat Soul' tones are primarily driven by the magical mix that is their respective pickup's construction, and that has not really altered all that much since Leo Fender's inception of the Telecaster and Stratocaster in 1950 ( the 'Esquire' Telecaster start point) and 1954 respectively.