If you are trying to emulate a particular guitarists tone, upgrade or replacement of pickups is a critical starting point. The best Stratocaster pickups for any one style or artist's tone, are not necessarily the best pickups for another signature tone. Modern effects boxes and amplifier modelling units / software can do an amazing job. But particularly for vintage tones, that process needs to start at the pickups, to be both authentic and characterful. The internet is full of detail of how to achieve a myriad of tones styles. This page is just a taste of some of the styles Ironstone regularly receives questions about and the recommended Ironstone pickup.

Primary Guitars
Though a wide range of Acoustics, Lap Steel and Les Paul's are used for recordings and live work, the most famous axe is the 'Black Strat' complete with Fender / Seymour Duncan  pups, shortened tremolo arm and the famous toggle switch to engage the Neck pickup with other selections.
The Amps
Best known for his use of Hiwatt valve amplifiers and Wem 4x12" cabinets. The aim is a high power but very clean level of amplification - almost like Hi-Fi. The valves give the basic bluesy vintage warmth, then its down to pedals to add distortion, colour and general effects.
Effects Equipment
The complexities of live touring have meant that the effects are integrated into a custom (Pete Cornish) pedal board /controller. But specific effects associated with the Gilmour tone include EH Big Muff and Dallas Arbiter Fuzz Face.
The Magic
Gilmour's style emphasises soul and restraint. Its not about the speed or amount of notes played, rather the choice and feeling that goes into them. Swooping bends and complex vibrato with the left hand add to the trade mark sound. The intro to 'Shine on' being a classic example. 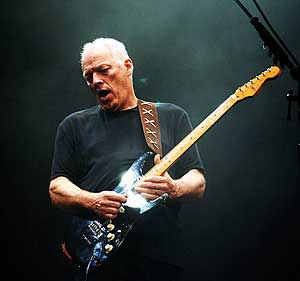 The clearest Bell like tones of the Ironstone range.
Primary Guitars
Along with Burns guitars, Hank Marvin is well known for the Fiesta Red standard '57 Strat' with maple-on-maple neck and gold plated fittings. This was the first Strat in the UK, imported from the USA by Cliff Richard..
There has been a long association with Kinman pickups and heavy weight strings were very much a part of the original Shadows sound.
The Amps
Like many early 60's British outfits, the amps of choice were Vox Combo's, AC15's (originally introduced in 1958) and AC30's (the later actually developed for the Shadows who required more than 15 Watts!).
Effects Equipment
The signature effect is of course the echo combination. Originally achieved by a multi head tape echo machine called a Meazzi Echomatic, this is now achieved through solid state devices like the Behringer Delay Machine. The resultant rhythmic multiple echo is an absolutely unique signature sound.
The Magic
So distinctive was Hank Marvins tone in the early 60's that other bands (reportedly including the Beatles!) deliberately chose other marques. The playing style makes epic use of the tremolo arm - 'Sleepwalk' being a classic example. The result (rather like Mr Gilmour) is about squeezing complexity of tone from a relatively slowly executed set of notes. 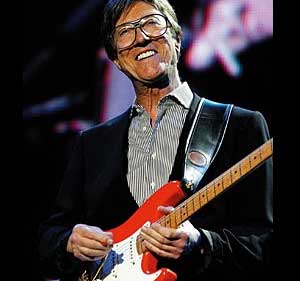 A great combination of power whilst retaining vintage warmth and clarity.
Primary Guitars
Of the many guitras played by SRV , his 'number One' 1959 (or 1962!) Strat was the icon. The intrument was far from being an original, though the various changes to it would have been subtle sonically. Very heavy strings 0.013 -0.058 were another integral feature of the set-up and were played correspondingly hard!.
Whilst subject to much speculation, the pups were actually stock Fender's dated 1959. The 1990 Fender SRV Strat used Texas Specials, which have thus become  linked to the SRV tone.
The Amps
Initially SRV used 60's / early 70's Fender tube amps - Twin Reverbs / Super Reverbs etc. As the SRV style and sound progressed however, an astonishing number and range of amps were used - both singularly and in combination.
Effects Equipment
Not a huge man for effects, the SRV classic overdrive tone was originally down to the Ibanez Tube Screamer.
The Magic
The description that is often used for the SRV tone is 'massive', though from the notes above its not really quite clear why from a gear perspective! There was genuinely as much contribution from his strength of playing to this tone as anything added by  expensive equipment. Check out one of the many live versions of Voodoo Child (Slight Return) from his hero Jimi Hendrix and you get the point! Big fiery playing style giving big output from the pups is where it all began. 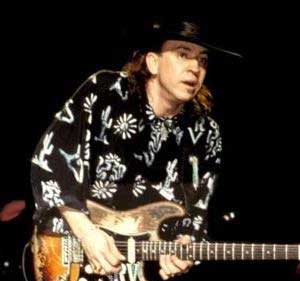 Something rather special. A mixture (Hybrid) of high modern resistance patterns, 43 AWG windings as used in the Texas Specials and a more pronounced vintage pole stagger!
Think Fender early CBS era!
Rather than one artist, these pickups are designed to capture of a flavour of an era. In the late 60's and early 70's several very influential players were emerging using Fender Strats - think Hendrix, Gallagher, Beck, Blackmore and Trower for example. And Led Zeppelin had just started their electro-acoustic period on Led Zeppelin III.

Each had their own style and tone of course, but these Hybrid pickups will give a great mixture of the tones that made this era so rich musically, from Cleans to Driven. Check out the sound clips and you will see what we mean! 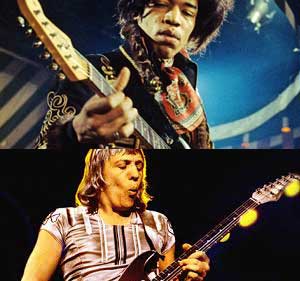 Precise materials selection, including all Alnico magnets, ensures authentic vintage tone is at the heart of all the Ironstone designs.

Every single pickup we sell has been hand finished and individually tested in Ironstone’s Rutland workshop.

The coolest vintage tones with outstanding value and service.

Ironstone accepts most major Credit Cards and Paypal (as well as BACS and cheque payments), using SSL certification for your purchase security.